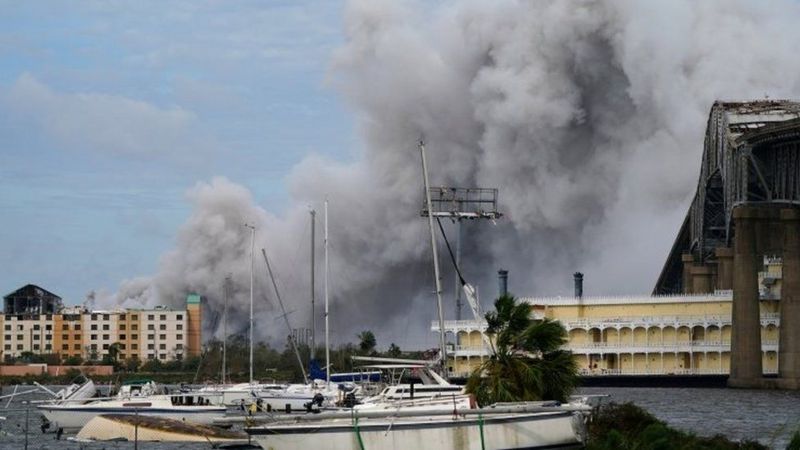 At least four people have been killed in a powerful hurricane in the US state of Louisiana.

Work is underway to assess the damage caused by Hurricane Laura. Locals have been warned after a fire broke out at a chemical factory in a Louisiana town.

Trump to visit
The strong winds of about 240 kilometers per hour have caused a lot of damage.Electricity supply to 500,000 households has been disrupted and a fire has broken out in an industrial chemical factory.However, the floodwaters did not come as the sea level rose as expected, as the storm moved eastward.Hurricane Hana struck South Texas, USA
Typhoon kills at least 11 in US

It is said that the storm has weakened now.President Donald Trump has been briefed on the latest developments.He said he would visit the affected area over the weekend.He said he had tried to postpone his address to the Republican National Convention to visit the area immediately because of the storm, but did not have to.”We were helped by a little bit of luck. The storm was very big but it went away quickly,” he said.Laura and previous storm Marco killed 24 people in the Caribbean.

Hurricane Laura, which is considered to be one of the strongest hurricanes in the United States, has caused significant damage to his state, but not as much as previously expected, said Louisiana Governor John Bell Edwards.Four people were killed when a tree fell on them.A fire broke out at a chemical factory on the outskirts of Lake Charles.After the fire, locals have been asked to close their windows and stay indoors.Neighboring Texas Gov. Greg Abbott also said the impact was less than expected.About 420,000 Texas residents were evacuated before the storm hit, and another 200,000 were evacuated in southwestern Louisiana.This task was further complicated by the Covid-19 infection.Eric Dove, who visited a Texas shelter, told Reuters: “We are told to maintain a social distance. But how do I maintain a social distance at the shelter?”

If you have a passport, visa or ticket, you can go abroad even if you are not allowed to do so

Laid barbed wire in the border area with India