Install Apps
(We have kept the girl’s name secret)
Rukum. Nawaraj BK, 20, of Jajarkot in Karnali has lost his life due to caste discrimination and inter-caste love affair. Two other friends who went to accompany him have also died. The death of Nawaraj, the only son of the family, has left his family separated. Urmila Bishwakarma (Nawaraj’s mother) of Bheri Municipality-4, Ranagaun has fainted after her son was found dead in the river. A similar situation has happened to two friends of Nawaraj who went to accompany his son. This incident has now plunged Rukum into mourning. As Mr. Mohanlal is unwell, he cannot do his daily work. Urmila, who raised four children alone, has now lost her world.
The eldest daughter is married. She was worried about the future of her three children. The son is only Nawaraj. Her world is ruined after her young son was kidnapped. Her son had a good reputation for playing a leading role in society. When Nawaraj’s girlfriend came home, she didn’t care if she had a friend at first. But later, when she found out that it was her boyfriend, Urmila also reminded her. She says that because of the way society views her, she thinks that her son will have problems later and reminds her not to pursue this relationship. But she says she did not expect the incident to take such a turn. If the small caste did not like the big caste, they would have been imprisoned by law. If you are killed, who should you go to for help? The government is not listening to our pain, ”said Urmila. He says he would not let his son go if he was at home that day.
Both of you, Thakuri, did not agree that it is not good to marry a Dalit. If I had been home on Saturday, I would not have let go. She said that the locals had handed over Nawaraj to the police earlier because of the same girl. I would have stopped him if he had gone first and reported it to the police. The girl called to pick him up and told him to go and his friends took him away. She says that she also heard the phone conversation between Najraj and the girl a few days ago. The young woman told Najraj that she had a baby in her womb and was about to get married.
My parents are about to get married. She was saying that she was pregnant. From now on, my son needs my child. Others were saying I didn’t need anything, she said. He had only one son. He was recruited in the police. We are poor dalits. They are saying that Thakuri should stop having a relationship with that girl. But Maner gave up his life now, said Babu Munlal.
This is how Nawaraj arrived after being called by his girlfriend! Nawaraj BK, 21, of Ranagaun in Bheri Municipality-4 of Jajarkot and Malla Tharki, 17, of Soti in Chaurjahari Municipality-8 of Paschimarukum reached out to the girl with the aim of turning their love of three years into marriage. Nawaraj and 19 of his friends are laughing on the way. But when the youth fell asleep, the atmosphere suddenly deteriorated.
They wanted to tie the knot even though the ‘caste’ of the alleged Dalit community’s Nawaraj and Thakuri community did not match. However, Nawaraj’s parents did not like inter-caste marriage. The parents say that they are in the mood to do it after their son insists. So Nawaraj went to bed with his friends on Saturday night to fetch the bride.
Nawaraj, who was suffering from mental stress and physical abuse from time to time, was advised to bring a large number of friends on Saturday. When they approached the house, the young woman’s mother looked at the young man more than the young woman. The injured youth, Ashish Vik, said that he started beating the youth after he called the villagers saying, “No matter how much you eat, it doesn’t matter.” Ashish says that they ran away and covered a distance of about four kilometers when the tapit started. He claimed that many of his friends were injured when he was taken to Lakheti-Lakheti Bheri river. Nawaraj died on Saturday while Tika Ram Sunar of Chaurjahari Municipality-1 and Ganesh Budha of Bheri Municipality-4 drowned in the river. According to the injured, the youth died due to not being able to swim in the water. Sandeep BK, Lokendra Sunar and Govind Shahi of other Bheri municipalities are still missing.
The father of the deceased youth said, “Our caste is not compatible. I have repeatedly said that this marriage is not right.” Twice they lodged a complaint with the police and when they did not come to the discussion, we returned. ” According to Nawaraj’s father, the girl had come to Nawaraj’s house twice in Pus. Nawaraj’s father had sent him saying that it was not possible as it was an inter-caste matter. “This situation came when I went to pick up my daughter-in-law on Saturday,” said Nawaraj’s father.
Injured youth Saroj Vandel says, “We were running on the road for half an hour. We jumped into the river for fear of being killed because the road was crooked. They did not stop throwing stones in the river. When the police came and arrested us, we finally felt safe. ” According to Jajarkot Deputy Superintendent of Police (DAAP) Kishor Shrestha, Rukum Police have arrested 12 persons including Dambar Bahadur Malla, Ward Chairman of Chaurajahari Municipality-8 and Bir Bahadur Malla, father of the girl. The body of the deceased has been kept at Jajarkot Hospital. The relatives did not allow the body to be examined saying that they were trying to cover up the incident.
Rukumpashchim Police Chief Deputy Superintendent of Police Thak Bahadur 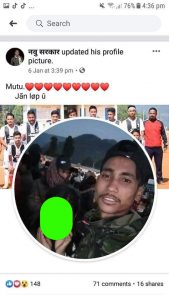 These 13 sensitive proposals if they become inactive without discussion, Every Nepali should know