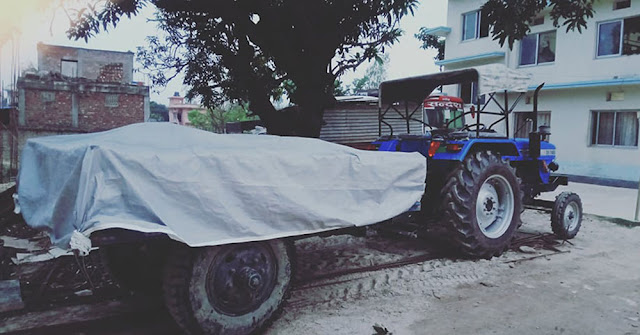 Drug and alcohol traffickers have been active in the wake of the Corona epidemic. Illegal drug and alcohol traffickers have become more involved while border checkpoints are closed and the country is locked down to control and prevent the spread of corona virus (Covid-19).
A 32-year-old Shravan Mandal of Mahadeva Gaonpalika-1 of Saptari has been arrested from Rajbiraj-6 on Thursday. DSP Tilak Bharti said that Mandal was arrested after it was revealed that he was trading in liquor.
According to DSP Bharti, they were arrested while they were being transported south from Rajbiraj in a tractor (Province 2-01-001 Ta 0528) with illegal liquor without paying the driver’s bill. He lied to the police about the much-needed food. According to the police, 90 cartoons of Dilewale, 20 cartons of Ambison and 6 cartons of Goldhalle were recovered from the suspects.
On the previous day, 19-year-old Mohd. Of Khadak Municipality-9 was buying drugs from the Indian market at Lahihi. Adij was arrested by the police. A team led by Himal KC, chief of the Armed Police Force, Nepal Warder Out Post Subharanpatti, arrested him. Three bottles of Corex and 30 nitrovet tablets were recovered from him. Jogindra Yadav, 45, of Bishnupur Gaonpalika 5 Parsahi in Saptari was arrested on Friday while he was bringing drugs from India on a motorcycle (Ko. 4 Pa ​​4368) in Chhinnamasta Gaonpalika 6 Hati of Saptari.
One hundred years ago, four youths from Saptari’s Kanchanrup and Hanumannagar Kankalini Municipality were arrested with drugs coming from Hanumannagar Kankalini Municipality-1 near Koshi Barrage on three motorcycles. According to Dhananjay Yadav of Chhinnamasta Gaonpalika-4 Lalapatti on the border, less liquor is smuggled from Nepal to India and drugs from India to Nepal after the ban on alcohol in Bihar.
Locals have complained that the risk of corona infection has also increased due to smuggling of illegal drugs and alcohol.